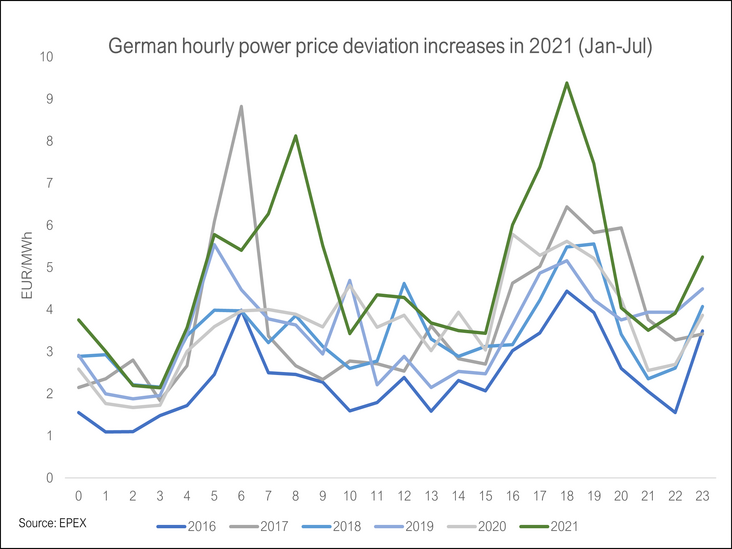 “The business case for [power system flexibility through battery storage] is price volatility,” said Matthias Koch at German think tank Oeko-Institut. “They store in periods of cheap prices and sell when prices are high.”

German spot power prices averaged EUR 54.95/MWh up to August, EUR 23.34 above the five-year average for the period, exchange data showed, amid a surge in fuel prices.

From January to the end of July, hourly price deviation from the average was higher overall than in the last five years, according to Montel calculations. The overall standard deviation for those seven months was EUR 7.64 this year, compared with EUR 4.86 for the five-year average.

“With the phase-out of coal and nuclear and with more expensive gas plants, in the long run it is likely that the [intraday] price spread increases,” said Arne Lilienkamp, analyst at EWI.

Germany plans to close its remaining 8.1 GW nuclear fleet by the end of 2022 and exit hard coal and lignite-fired capacity by 2038 to reach its climate goals.

The levelized cost of electricity (LCOE) for utility-scale solar and storage is well below that of new combined-cycle gas turbines, Fraunhofer Institute research has shown.

“The business case is becoming more lucrative, while the battery prices are decreasing,” said Lilienkamp.

Profit needs to be assessed
By 2050, smaller solar and battery systems could make up the bulk of Germany’s installed flexible capacity, Oeko-Institut forecast.

Batteries are seen as a crucial tool for improving short-term security of supply, as more intermittent renewable generation sources are integrated into the power grid. Installed capacity of residential batteries stood at 2.3 GWh in production hours last year, estimates from the German Energy Storage Association showed.

“Investors and developers are also very interested to assess longer-duration batteries and better understand the impact of technical and economic tipping points on profit and risk profiles,” said Bart Stoffer of consultancy DNV.

Still, DNV’s models show increasing power price volatility driven by growing wind and solar capacity, implying that the business case for flexibility including batteries and other storage options should improve in the long run.