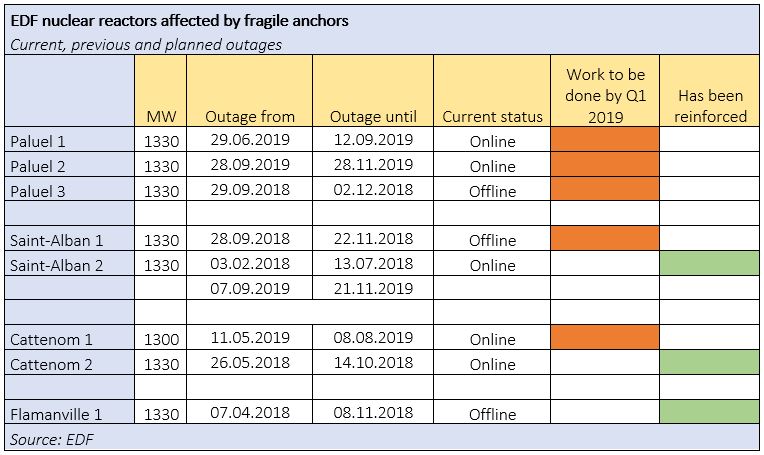 (Montel) French utility EDF has revealed flaws in ground anchors at eight of its nuclear reactors, with the design deemed ineffective in the event of a big earthquake, it said late on Wednesday.

It planned to reinforce the anchors “as soon as possible” at Cattenom 1, Paluel 1, Paluel 2, Paluel 3 and Saint-Alban 1 – totalling 6.6 GW – between now and the end of the March, it added in a statement to the country’s ASN nuclear safety authority.

The group had already reinforced the anchors at Cattenom 2, Flamanville 1 and Saint-Alban 2, it said.

The flaws were found during a recent 10-year service of these units, it said.

"Generic problem"
EDF classified this “generic” problem at level one on the Ines scale, the international ranking for nuclear safety events, where seven is the most extreme.

Contacted by Montel on Thursday, EDF could not provide more information.

The group revealed earlier this year that control rods were blocked at its Belleville 2 (1,310 MW) and St Alban 2 (1,335 MW) reactors, while it was carrying out inspections at six other units.